Writing with my red pen for Charly Hansen. Charly was a red and yellow man. An artist who knew it and lived it, and wore it. But this, red-pen letter of gratefulness is for both Charly and for Alice his partner, and for their daughters too. For making space, and for sharing it.

I’ve been gifted greatly, so has Marley my good dog, and Rosalina the Falling Star cat, with a place to be. Designed and built with attention, intention and the goal of being a real art studio. Charly’s studio in the Alley, just behind his house on Second Street.

This morning I sit in Charly’s chair having slept here for the past three nights, moving and unpacking my boxes of art-making and studio supplies. Alice agreed to renting the space to me over the winter. And so, here I am, with my tools, supplies and animal companions. In a real art studio, that has the message “Fine Art Forever” written in concrete, on the doorstep.

My encounters and relationship with Charly were limited, to a few community art-projects, which included our Earth Day Parade build, dance encounters, mingling with the Radio Anyway crew and the Arts Work Alliance that he helped organize.

Likewise, my friend Hughthir became good friends with Charly via dance, Radio Anyway and their shared interest, skills in construction/building. I remember H and Charly talking on the phone, lots. Charly calling H directly after the Radio Anyway show was aired to discuss and critique and congratulate, also calling for advice, help on the studio build, and on occasion Charly would drive out to our place in the woods to fish in Gilbert Lake.

My dearheart Mary White, H’s mother, became ill the year that Charly finished building this garage-disguised studio. We were very immersed in what I would for four years, call Marycare, our lives mostly circulating around setting up a living and caring system for Mary helping her through her illness, at her woods home.

The year following Mary’s diagnosis, Charly was also diagnosed with a serious illness, and similarly Alice and her daughters began Charly support and caretaking. Over the next couple of years, both he and Mary were in and out of the same hospital.

One spring day I drove into town to be with Mary. On the way, I passed an abandon farm where a small field of bright, yellow daffodils were shouting at me to stop. So I did. When I arrived at the hospital, just down the hall from Mary I ran into Charly, pushing his IV drip gadget along in his hospital gown. Now, I want to say he was also wearing his red hat and yellow jacket because that’s the vision I’m conjuring, but that may not have been the case. Anyways, I immediately split the big bunch of daffodils and handed him a bouquet. In a quick moment, with those yellow blooms it was necessary for me to honestly acknowledge how his special spirit had touched me. I wanted him to know I loved him. That I thought he was beautiful and brave. I thank the daffodils for shouting at me, waking me up, helping me to act.

At that time in my life, I was learning about illness and sudden death with many encounters. Sadly for both of our families, we lost Mary and Charly within the next two years. Their lives ended after a long struggle with their illness, in their homes with family and the assistance of Hospice.

It was both a beautiful and draining experience, and it’s then that I began calling it a “Demanding Universe” message, with the subtitle of “WAKE UP! And a sub-sub-title of “Sometimes Fierce Wild Animal Teeth Will Be Shown”. After sadness, shock, disbelief, and depression had its way with me, in the end these messages are generally quite simple and basic. We are mere mortals, after all. Acknowledging our mere mortal-ness, definitely helps to kick consciousness into a higher gear.

I feel grateful and humbled by Charly as an exceptionally creative artist, as a courageous human, and also in that particular moment, accepting my token of love for him, in that bunch of daffodils.

Accepting the process of vulnerably opening for this fierce love, I’ve found to be very BIG work, regardless of who is giving and who is receiving. And just when we believe there to be a shortage of love and caring in the world, daffodils or some other thing wakes us up to remember.

That line drawing by one of the Impressionist artists, is it Monet, Picasso, Matisse? I think it’s Picasso. Where one hand is offering a bunch of flowers and the other is accepting…that moment of: for you, in your honor, because I’m loving you… was what happened for me in that exchange with Charly. Fierce, authentic love.

In this life, this place, just a tiny amount of time passing, we do have these beautiful suspended moments to act upon. Then it becomes double, both a moment of awareness, and a moment of acting on the awareness. Really, good.

And now I’m surrounded with this great extension of “gift”, Charly’s work, his books, his spirit, his studio. Another mentor, another teacher. I wonder, will I find out what a Fine-Artist really is? I’ve always had a bit of a thing about what I call “Fine-Art Attitude”… juried competitions, and portfolio reviews, etc…

And now everyday, for awhile, I’ll step across that message….Fine Art Forever… when I open the door and walk inside Charly’s place. 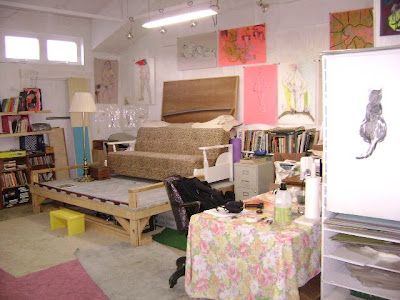 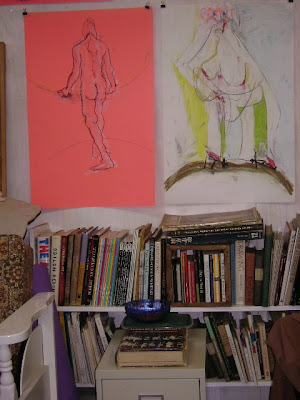 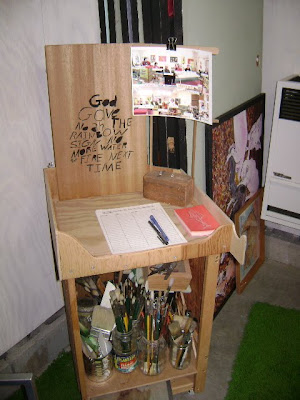 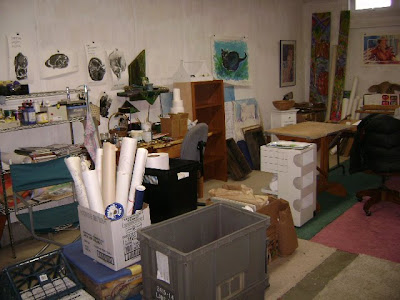 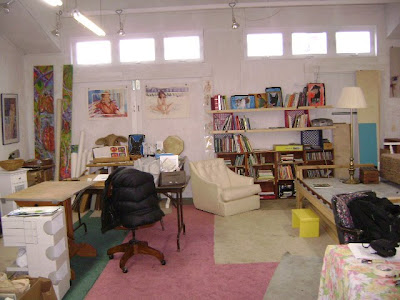 Here’s the four-directional, inside view….

The 2009 Conference on Michigan’s Future: Energy, Economy & Environment takes a head on look at the economic crisis, the looming energy crisis, and the environment crisis and explores possible solutions and a vision of a more self-sufficient, sustainable, and resilient Michigan. For more info. on the conference go to: www.localfuture.org

Here’s my presentation description for the conference on November 15, Sunday AM, session beginning at 8:00 AM—

We humans live as part of the natural world, one member of a community much larger than our species alone. The natural world feeds us and sustains us, and our actions affect all other members of our community: we are all in this together. Yet most of us do not experience these realities with any frequency at all.

Permaculture fosters the emergence of a culture which encourages and supports us to experience ourselves in the ways of knowing ourselves as “native” to the places we live in.

The basic teaching and strategy of Permaculture is to recognize our human selves as a non-fixed species on the move, and, our absolute, responsible part as collaborators on Earth to do as the planet has always asked of us….to take care-full steps, and action based on the understanding and practice and the fine-art of observation. Being mindful, intentional, and integrity-based in our choices and decisions.

Permaculture is a friend of the Right Brain and helps us recognize our role as artists, designers, and gardeners on a mission to make and do, tend and mend, and feed ourselves and our families. With guiding principals and ethics, the Permaculture tool-box or re-skilling set, allows us to utilize a basic, intelligent and creative Ecological Design process, which contributes to a self-regulating, harmonious and healing system. This we know is necessary in our peak oil, post-industrial world, and for the sake of our children.

And so, to create and implement complete cultural systems that consciously mimic ecosystem structure and function, we can go into our front or backyard “gardens”, and to our Community Garden plot and begin, again. Re-invigorating the concepts of Perennial gardening, which produces plenty of food at lower energetic and labor costs while re-building soil and ecosystem health. We can do this work as families, with our children, youth, and elders, and neighbors along side and with us, learning ways in which we can shift our community culture towards ways of life that include perennial food production.

Drawing on the Right Side of Your Brain,
By Dr. Betty Edwards

The Zen of Seeing,
Frederick Franck

Edible Forest Gardens, Volume One, and Two,
By Dave Jacke and Eric Toenesmeier

Penny Krebiehl, aka O’k, is a certified Permaculture designer and instructor, as well as an artist and community organizer specializing in programming for children, youth and their families. She conducts many creative, educational events, helps build the Grand Traverse Earth Day Parade and offers Permaculture design services and consultation in Michigan. Penny has studied, trained, and practiced with Permaculturists in North West and North Eastern United States since 2005, and gives grateful thanks to all of her devoted teachers. She is the founder and Executive Directress of Little Artshram, a non-profit, begun in Lansing, MI in 1993 and is inspired by children of all ages who are close to the earth, learning and re-learning as we mimic nature both in our educational systems as well as within the great paradigm shift and transition of our social, cultural structure. Permaculture principals, ethics and the eco-design process have been a central part of the development of the Little Artshram Art-Farm and Community Garden programs, located at the old State Hospital on the Historic Barns property, in Traverse City, MI.